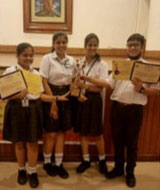 Delhi, Aug 06, 2022: Ramakrishna Mission, New Delhi conducted a Quiz Competition on 6 August 2022 for the school children of Delhi and Delhi NCR region as a part of Azadi Ka Amrit Mahotsav an initiative by the Ministry of Culture, Government of India, to clelebrate and commemorate 75 years of India’s Independence.

Top 5 students of Apeejay School, Pitampura qualified for the other rounds at Ramakrishna Mission. In the final round Shubham Ashish Kulkarni of class XI B and Jiya Sateeja of class X A represented our school team.

Our school won the first position in the Quiz competition with a thumping score emerging as an unbeatable winner in the third and final round. Theya also received a trophy and cash prize.