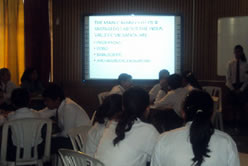 Social science day was celebrated in lieu of World’s Tolerance Day which is being celebrated on 16th November every year. On this day the school held a special assembly where a short play was enacted by the extremely talented students of the school related to reducing the gap between the poor and the rich and giving us a good moral of giving a new start by reducing all these kinds of acts. In junior classes, there was a competition based on different countries, their cultures and their specialties which was held by the name of “know your country”.

In senior classes, a competition was held based on making advertisements where kids were given on the spot topic and they prepared the advertisement which a social message attached to it. In this way with different kinds of activities conducted during the day the students were being informed with this social message of not discriminating on any grounds amongst people and even treating each one alike. Overall this whole programme was an informative act being conducted with the effort of the social science department.