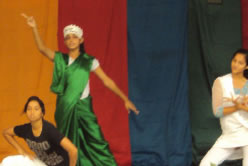 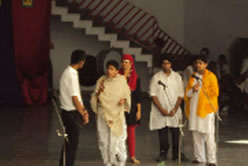 Face to Faith team of Apeejay School, Pitampura celebrated Face to Faith Day on the 13th of October, 2011. The day started with a special assembly. The beginning was marked by taking blessing of the almighty. The teacher in-charge of the Face to Faith programme, Ms. Vandana Adwani discussed programme’s objective, initiative and success as well as about the exposure the students have received so far. After that Tanvi Gupta (Class X-D) presented a sel f-composed poem titled ‘Faith Illuminates’. Following the poem was a ‘Natika’ (a short play), titled, “Faith in Humanity” presented by our senior students which emphasised on Humanitarianism. Face to Faith students then shared their experiences of the Face to Faith programme highlighting how it has found a fundamental place for itself in their heart, minds and souls than rather being conducive to the curriculum. Next up was a dance on the theme "Vasudeva Kutumbukum" (The world is a single family) performed by our senior students. It was a fusion of diverse dance forms showcasing the concept of Mother Earth based on the lines of ‘Unity in diversity’ while at the same time reminding us that we are, in fact, a part of a larger entity: Humanity.

Our Principal Sir, Mr. D.K. Bedi addressed the gathering and further discussed about the objectives of the programme. Several inter-class competitions were held to broaden the vision of the students and gave them an insight into various perceptions of faith.

The day marked an avant-garde approach towards Faith. This celebration of Faith was a welcoming step which urged the students to break their conventional form of thinking and explore the world through different perspectives.