The prestigious National "CBSE Best Teacher Award" for 2014 was conferred on Principal, Shri Rakesh Joshi, by the HRD Ministry for his remarkable contribution in the field of education. Principal Rakesh Joshi was honoured with certificate/citation, a cash award of Rs.50000/- and a shawl during a ceremony organised in New Delhi on 3rd September 2015. He received this award from the Honourable Minister of Human Resource Development, Govt. of India, Ms. Smriti Irani; Secretary, Ministry of Education, Govt. of India, MoS, HRD, Ram Shankar Katheria and CBSE Chairman, Satbir Bedi.

Proud Moments for the School

The prestigious National 'CBSE Best Teacher Award' for 2014 was conferred on Principal, Shri Rakesh Joshi, by the HRD Ministry for his remarkable contribution in the field of education. Mrs. Chandrika Arry was honoured, in the month of December 2011, with the Best Teacher Award (Pre-Primary) from CIDCO for the Academic year 2009-2010. 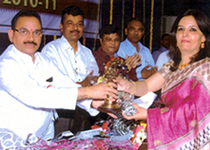 Mrs. Shobana Barman was selected as the “Best Teacher”, in the Pre-primary Section of CIDCO Nodal area for the academic year 2010-2011, by an expert committee appointed by CIDCO. The award was received by her on 2nd March, 2012. On the 5th of September 2008, the Principal, Mr. N.N. Nayyar was honoured with the National Award for Teachers by the Ministry of Human Resource Development at Delhi. This award is given in public recognition of valuable services to the community as a teacher of outstanding merit. The award brings a great repute to Apeejay School, Nerul and speaks of the high quality of teaching at the school.

A strive to reach and teach It was a great day for Apeejay School, Nerul to welcome yet another honour in the form of Best Teacher Award from CIDCO which was conferred to Mrs. Vijayalakshmi K.C (PRT Maths). She has been working as a teacher since 1990. She started her teaching career in Vivekanand English High School, Trombay as an English / Mathematics Teacher. Later she joined Atomic Energy Central School, Anushaktinagar for three years. She has been an integral part of Apeejay School, Nerul since 1997. She loves her role as a teacher and feels that she was meant to be with her students. A Science graduate from Kerala, she has a great deal of patience and practices Yoga and meditates regularly. A calm and composed individual, she is committed to her profession. “ I constantly strive to reach and teach every student under my care” she says.