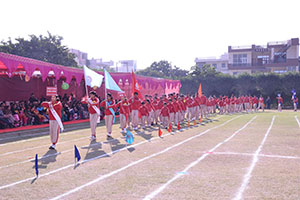 The School celebrated its Annual Sports Day, Apeejay Athena’ 15, with exuberance and fervor. The event commenced with the welcome of the Chief Guest, Ms. Neha Rathi, a wrestler & Arjuna Awardee and the Guest of Honour, Dr. Mahesh Chauhan and other dignitaries by the School Principal, Ms. Purnima Vohra. As the meet was declared open, the four houses impressed all with their synchronised March Past.

The opening dance on the song ‘Mi hai Koli, Surila Doli’, a Maharashtrian Koli dance was performed by the students. The students ran on the tracks with speed, accuracy and coordination. The highlight of the day was the display of Taekwondo defence skills by the students of the Primary wing. The Chief Guest, Ms. Neha Rathi, in her address inspired the young girls to aim for the Olympics and bring pride to the nation. A mass drill, Aerobics and Yoga by the Pre-Primary wing called for much praise from the audience. The parents participated in the fun race, prepared traffic signals and did acts of balancing with great enthusiasm. The programme concluded with a creative dance followed by the National Anthem.